Skip to content
Home2016 in Review: My Bullet Journal

This post was supposed to go up yesterday… but, well, it didn’t… Here it is a day late…

2016 was the year I started my bullet journal.  Okay, if we get technical, I experimented with it briefly during the holidays in 2015 so that I would have a better idea of what I liked for the start of 2016, but really it was started in earnest in 2016.

For my first two goals of 2016 I was basically wanting to start using a bullet journal in earnest to organize my life and to also create good habits.  So, while these “goals” were only #1 and #2 on my list of goals, and #1 was really vague and not “SMART”, goal #2 actually consisted of various goals that grew and changed over the year.

To review this goal for a specific pass/fail type result would be very difficult because, as I mentioned already, it was not a “SMART” goal, so I had no definition of the end result.  However, I have indeed stuck with my bullet journaling and can definitely say that I feel it has helped me stay organized and focused, as much as is possible with a scatterbrain like myself.  (Ooh, shiny!)

I reviewed my bullet journal set up, back in September, and honestly it hasn’t changed much, and I don’t foresee any major changes in the near future because it is working for me.  I don’t think that “using my bullet journal” will be a goal for 2017, but it will be what helps me keep with my goals and I am definitely not going to stop, so I figured I’d give it another review for the end of the year…

At the beginning of my new bullet journal notebook that I started in May, I had a 12 month future log.  But now that we are about to start 2017, I’m wanting to start planning things for further down the road, I’ve added in a new 3 month future log for the next 3 months of the year.  I’m not 100% sure that I won’t find this 3 month future log a little silly if I have to skip around through my book every 3 months to find the future log, but maybe the next one that I make will be a longer one.

My monthly spread hasn’t changed from the very beginning.  I lay out the days in a vertical format and fill out everything that is planned for that month.  I find this visual representation of the month is really working for me, so I am keeping it that way going forward.

As I mentioned in September, I am really enjoying the vertical weekly spread.  I like being able to lay out the week ahead and get a plan together for the week.  And the vertical daily sections are roughly laid out in terms of the order of how I will do things (or plan to do things) that day. 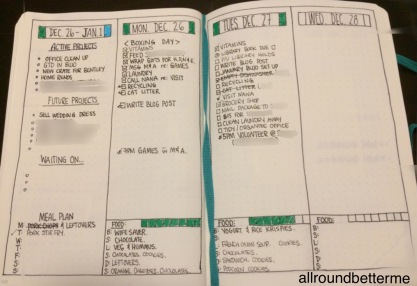 The only time I’ve switched it up since September is when I was away for work for extended periods.  I’ve discussed it before, but when I am away at site for work, I tend to not do much other than work long days, so there is no point having a bunch of room for to-do items.  I can only really fit one or two things.  For those weeks, I crammed everything in to a single page spread, rather than spread them out on to two.  It worked well, and I think I will do that again the next time that I am scheduled to go away for work (should be coming up in the near future). 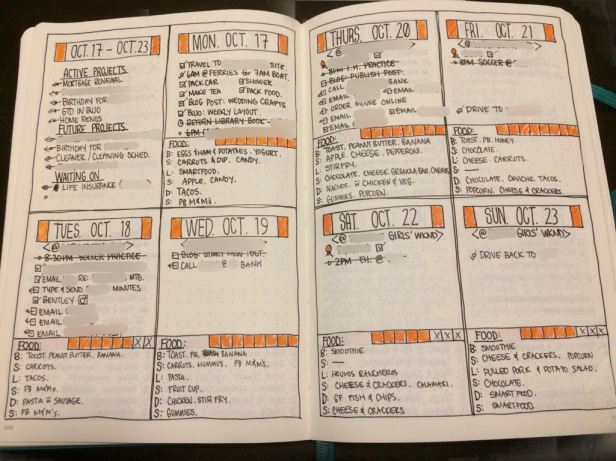 I don’t think I’ve shared much of the other stuff that I’ve put in my bullet journal ever.  I shared my training plan when I was going to do another half marathon this past fall.  But I’ve put lots of random lists or notes in my bullet journal.  For example, when we went to Quebec this fall for my friend’s wedding, I made a packing list:

I also created a blog planner for December.  (It doesn’t always help me get things done on time, but at least I have an idea of what I’m going to try and post about.)

And I’ve made a few spreads to help organize my thoughts on hosting some holiday parties.

As I mentioned at the beginning of this post, my second goal for 2016 was really a collection of smaller goals.  And throughout the year, those goals have changed as my priorities or my circumstances change, or if I wanted to adjust my focus a bit, but generally they have remained the same.

The goals in my habit tracker were often related.  Or the results (or lack of results) were connected.  If I didn’t get to bed by 10:30, then the likelihood of me getting up at 5:30 was pretty slim.  If I don’t get up early, then I can’t get some fitness in before work, or I end up not getting to work before 9am…

Anyway, I’m not overly concerned that I haven’t mastered all these habits to 100%.  The fact that I have this table that I try to update every night means that if I decide to go to bed without first cleaning up the dishes in the sink, it is most likely a conscious decision to do them in the morning because something else had priority that night.  I’m not trying to be perfect.  If I were, my blog would be call “the perfect me”, but no, I am just trying to be better.  And I definitely have gotten better at a lot of the habits that I tracked throughout the year with my habit trackers.

In my last review, we were half way through the month already… The habits that I was most pleased with were my getting to work before 9am (which I missed only twice the whole month!) and drinking 8 glasses of water (or tea) a day (which I missed only 11 times).  I am most disappointed in my bujo review and my exercise.  But I am wondering if my bujo review habit might be a little skewed.  It’s not that I didn’t review my bujo, but that I didn’t do it right before bed to review the day.  I think I want to perhaps review my evening routine and get myself a new one to focus on. 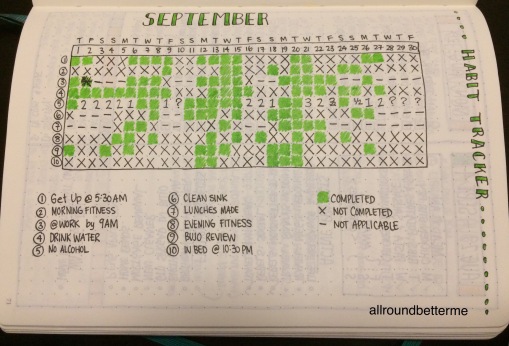 October was a month filled with travel (both work and pleasure) and illness (nasty fall cold or flu).  The habit tracker sort of shows that with not much colour and a lot of black X’s.  I am most pleased with my drinking water habit because it basically stayed the same with all the chaos.  And I am definitely most disappointed with my exercise/fitness.  I think this is the first time I’ve ever had a full row of X’s (habit #2 – morning fitness).  Ugh.  No wonder I was feeling out of shape. 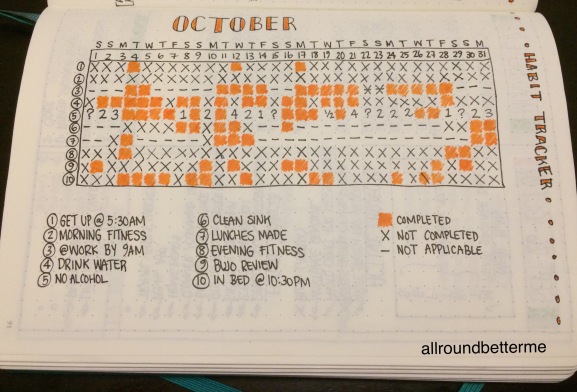 November had some small improvements from October, but probably mostly because I wasn’t away as much.  I didn’t improve on the exercise/fitness much, but there were a couple mornings that I did something, so it wasn’t a complete blank line.  I am most pleased with my getting to work before 9am in November (habit #3).  I think I was getting in to a better routine, and I only missed that goal 3 times in the month, but now I just have to figure out how to fit in more running in the mornings.  The habit that I’m most disappointed in again is the exercise/fitness.  Common theme it seems to be…

December isn’t quite done yet, but I’m off work for the rest of the month, so my schedule is all wonky and so best to just review it now… I am still very pleased with my water consumption.  And this month has been really good for having our lunches made the night before so that we can hopefully decrease the amount of lunches that we need to buy.  And once again, I am disappointed in my commitment to fitness.  I’ll have to make that my priority for 2017.

Do you bullet journal?  Or do you have a different way to keep yourself organized and focused on your goals?