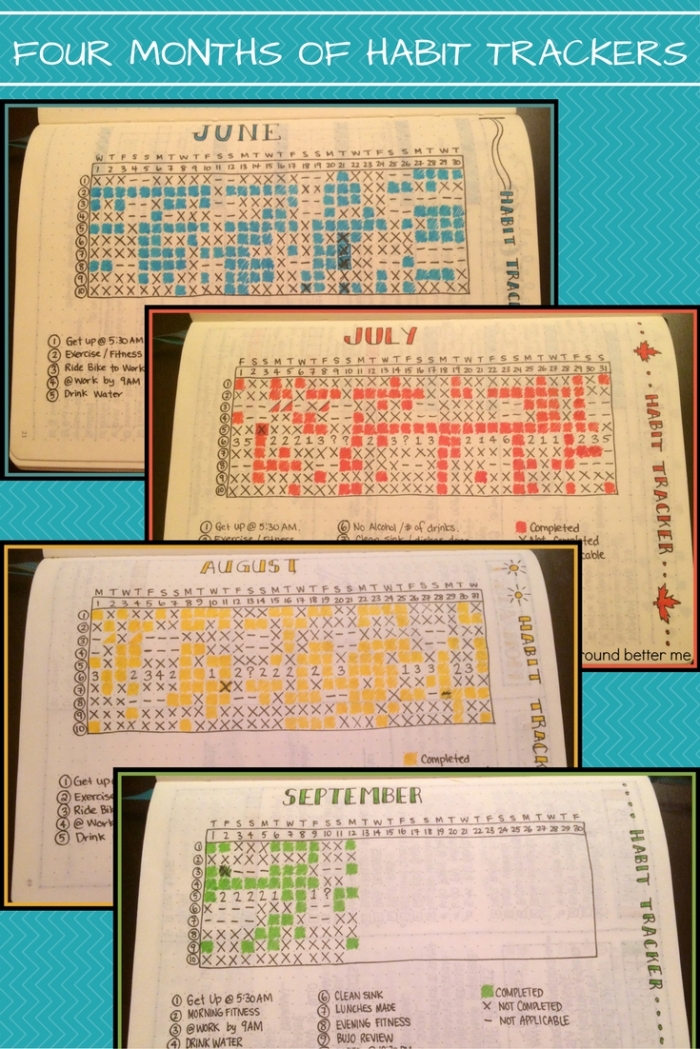 As I mentioned last week, Goal #2 of my goals for 2016 is really a collection of smaller goals.  They have evolved through out the year as my priorities change, or as I decide I want to work more on one thing or the other.

The Original Goal had 7 items on the habit tracker, but some were combinations of things.  My first check-in was back in February where I had increased the number to 8, but still had the combined items (morning & evening routines), and then I did another update in March where I split up a bunch of the items and had a total of 12 habits to track.  I skipped April because we were away on our honeymoon for most of it…

Then when I got my new bullet journal, I did another habit tracker.  I split up some of the combined habits, and got rid of a couple, so I still has 12 habits to track.  I did an update in June where I reduced the number of habits to 10.  But I haven’t done an update since…

I haven’t really changed my habit tracker up much since then, I am just plugging along, working on making these things routine.  So let’s quickly review how I have done, and where I need to re-focus my efforts to make some improvements.

I’m not going to go over everything in detail… but I would say the two most successful habits in June were exercising and drinking water.  No surprise there.  The least successful habits in June were getting up at 5:30 am and going to be by 10:30 pm.  Do you think they are related?  The habit I am most proud of is that I biked to work 50% of the days that it was possible for me to bike.  That makes me happy. 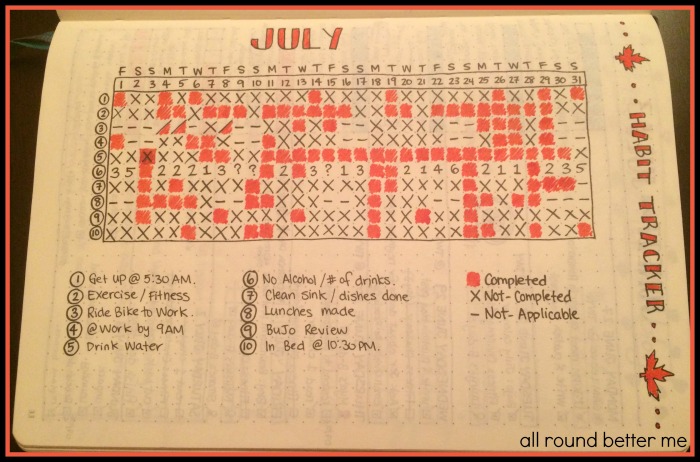 Once again, the top two habits were exercising and drinking water.  The worst two were checking my BuJo in the evenings and drinking alcohol… Again, I wonder if those two are related… Have a drink or two on the deck in the evening probably means no more productivity…  But, good to note that there was improvement on getting up in the morning and going to bed at night (albeit a very small improvement, but let’s not dwell on the details). 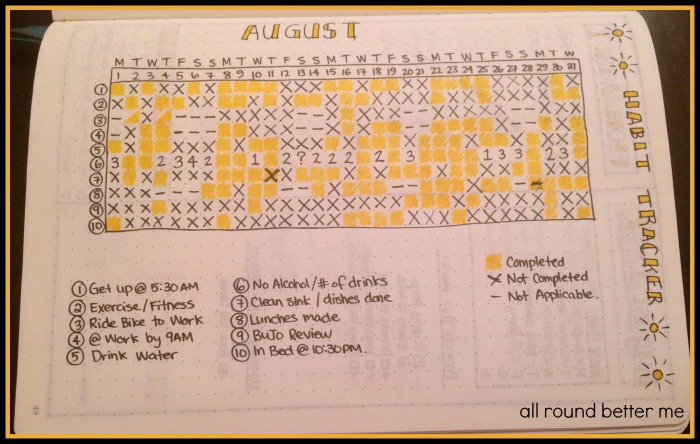 In August, things changed a bit.  The top two habits were making lunches the night before work, and getting up at 5:30 am.  Although, that’s only true if I ignore Saturdays and Sundays (which really I think is fine to sleep in), so the third most successful habit was actually getting to work before 9 am.  Hmmm… interesting that the month I do well at getting up early I also get to work on time…

The worst habit was riding my bike to work… But I knew that would be the case because my morning commute now includes dropping the puppy off at puppy daycare, and I do not currently have a method of transporting the pup on my bike.  In fact, I took riding my bike off the habit tracker for September because of this.

As I mentioned, I took riding my bike off the habit tracker for September, so I decided to split up my exercise tracking in to morning and evening.  I am curious about this, because I would like to run in the mornings at least 3 times a week, and I know I have sports in the evenings at least 2 times a week, so I want to see how my motivation is and what patterns I see.

So far I have been unsuccessful at getting to bed before 10:30 pm… And I have only gone for a morning run once… But, I am doing pretty well at getting up early (mostly thanks to the pup) and I am doing very well at drinking water.

So, What Does This All Mean?

And, what do I do with these results?  It is easy to see that there are connections between the various habits, so getting better at one will obviously make me better at others… It is finding the one that I know I can get the motivation to work on… It’s also kind of sad to see that not many habits make it to the 50% range (the minimum for a passing grade in many schools).  I at least want to pass!  The ultimate goal is to be way higher than 50%, but as a baby step, I’m going to try for at least 50% on each one.

Tonight, I have promised myself that I will lay out my running clothes before bed, so when the pup gets me up at 5am for his morning pee, I will put on my running clothes and go for a run.  That will get me two boxes filled in… And should hopefully lead to getting to work before 9am (I’m getting pretty consistent at this now).

After the wedding we went to this past weekend (the ? in the alcohol line), my husband and I have made an agreement to go alcohol free until we go to another wedding at the end of the month, so that should give me the motivation for some good success in that habit this month.  After that, I might change this habit/goal back to my 7 drinks per week  goal that I was doing in 2015.

What habits are you working on?