Skip to content
Home2016 in Review: My Misc. Goals

Happy New Year!  And, another delayed post… Holidays and schedules really don’t mix… I hope you had a great new year’s eve and had a fun time welcoming in the new year.  Hopefully I’ll be more successful this year in keeping my Tuesday/Thursday schedule.  Anyway…

As I mentioned when I started this goal at the beginning of the year, I figured that this goal would be pretty easy and fun to do.  I did a mid-year update on this goal in June.  I felt good about it at that point.  Since then, I have done at least one family related thing each month.  Some months a bit more.  So I totally met this goal.  I am not sure exactly what I was exactly hoping for with this goal in terms of feeling, but even though the numbers show I was successful, sometimes I feel like my intention wasn’t quite there or that I took the easy route, rather than actually take this challenge and roll with it.  But we will call this goal a success in any case.

I sort of lumped this goal in with goal #7 when I did the initial setting of the goal and the mid-year update, so to separate it out now is a little different, but just like the family goal, this one was successful in terms of the actual numbers, but I still feel the intention and execution of this goal could have been better.  I seem to go in fits and spurts with certain people, which is probably normal, but I feel like I need to make an effort to not go so long between visits or contact with some of my longtime friends.  But, in terms of pass or fail, this goal was definitely a pass.

Read one book per month.  Seems pretty easy right?  Right… Well… This goal was a complete and utter failure.  I read a total of 4 complete books so far this year, and 2 of those were in the last week.  It’s not that I haven’t read things… I’ve read lots of parts of books… Like travel books before our honeymoon… And books about dogs and dog training before we got our puppy… And those aren’t really books that you pick up to read cover to cover… And then there is the list of books that I started, but didn’t quite finish before having to return to the library.  I have this list in my bullet journal. 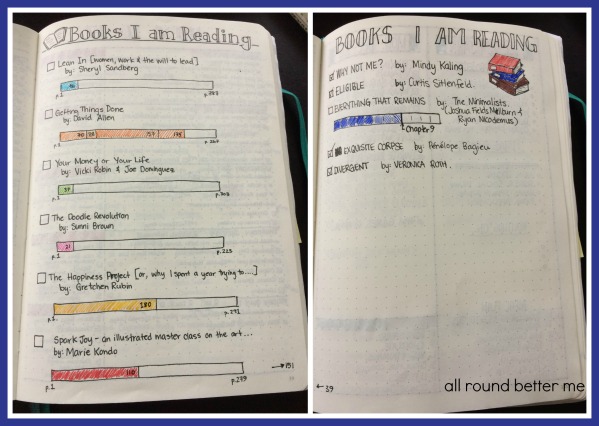 The interesting thing to note is that the books that I have actually finished are all fiction and sort of “fluff” books, whereas the books that take me longer to read are subjects where I want to learn or do things with the content.  Makes sense that those take longer I guess, right?

If you check my running results page, or if you’ve followed along with my habit tracker review in my last post, you’ll know that I didn’t make it on this one.  Even though I made a deal with myself that I could make a half marathon count for 2 of the 5 races, I ended up not running the half because I had the “death cold”.  And since then I really have basically stopped running.  I could blame my lack of morning schedule with the addition of our puppy… Or I could blame my running buddy who went and got pregnant… But really it is all on me… I really do enjoy running once I am out there running.  And I love the feeling that being fit gives me when I play soccer or fieldhockey (my two sports of choice), but the actually getting up in the morning and leaving in the dark, cold and rain… I apparently lack the motivation and personal discipline to do that…

So, for these 4 goals I’m going at a 50% success rate.  If we gave partial marks for progress towards goals it would be higher… Not bad… I’ll discuss in the coming weeks what I think I’ll do for 2017.