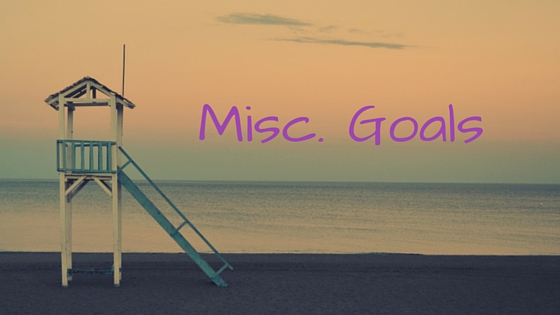 As I  mentioned in my last post, I’ve messed up my categorization of my goals for 2016 (compared to 2015), so this post will have the rest of my random personal goals for 2016.

Over the holidays, my sister shared this article with me:  If you’re 30% through your life, you’re likely 90% through your best relationships.  Though I followed the links there and found the original post here: The Tail End.

I found the article interesting, and eye opening, and the graphics were pretty mind-boggling.  If you don’t want to go over there and read the article, basically it is laying out visually, the amount of months, weeks or days that are contained in a 90 year life.  And it has fun by looking at your life in terms of other events, like number of US presidents or Superbowls or swims in the ocean…

But then it goes on to discuss how the 34 year old author only has about 300 days total left with his 60 year old parents (assuming they live until 90 and he continues with the approximate 10 days a year), which compared to the amount from his youth is only about 5% of his total in-person parent time left.  That doesn’t sound like much, does it?

Similarly, he discusses the amount of time left with his sisters (about 15%) and with his high school buddies (about 7%)… It’s an interesting concept to think about, and it got me wondering… How much time do I have left with my family and friends?  Am I making the best of it?

As I was thinking about that, I got to thinking about the different relationships with members of my extended family.  I have a coworker who is best-friends with her cousin, and they were each other’s maid of honour at their weddings.  (I guess technically, one was a matron, since one was married before the other.)  I live in the same city as most of my cousins, but I barely know them and don’t see them other than at large family functions.  To be fair, my coworker is the same age as her cousin, and the closest cousin to me in age is 8 years older than me and the next is 12 years younger than me… but still…

Anyway, this thinking has brought me to decide on my focus for 2016, which is relationships.  I want to nurture and grow my relationships, with a focus on my family and my longtime friends.  The ones that I may be in the “tail-end” of our time together. So I made two goals for 2016 relating to that:

Goal #7: Plan 1 visit with family (outside the usual special occasions) per month.

Goal #8: Make an effort to reconnect, visit or stay connected with at least 1 longtime friend per month.

They shouldn’t be hard goals to keep, but it will take a bit of effort to make sure that I don’t get myself too busy with other stuff.  This is part of why my bullet journal and my daily habits are so important.  If I can get the regular life stuff organized and done, then I’ll have more time to concentrate on these two goals.

I also think that these goals will be fun.  It will be loads of fun to have dinner with my aunts and uncles, and really get to know them as cool people, not the random family adults that would show up at Christmas and for my birthday as a kid… (I make it sound like they are complete strangers, which they are not, but I want to know them better.  I want to know what their interests are and what would be the “perfect” gift for them if I get their name in a secret Santa draw.)

So far, I have been pretty successful.  I had a games night with my sister and two of my cousins, and I had a lunch with my grandmother.  I’ve made an effort to message a few of my out of town friends that I don’t see or talk to as often.  And I’ve made plans to hang out with a couple (good friends from university) that I probably haven’t seen since my wedding, and before that… not sure…

And now for something completely different…  (Monty Python anyone?)

I mentioned in my post about my goal #2 for 2016 that I was working on trying to do some reading every day in an attempt to read 12 books in 2016.  That’s only 1 per month, so should be totally doable… However, my attempts so far have been 2 half books… that I didn’t finish before they had to be returned to the library… I’m on the list to get each of them again, so hopefully I will be able to pick up where I left off and get them read.  I have so many things that I want to learn about, and so many books that are on my “to read” list, I hope that I can knock 12 off the list pretty easily.

Last year I ran in 3 races (you can see my results here).  So I want to improve on that this year and run in 5.  There are so many local races in this area, and we are lucky to be able to run outdoors year-round.  I should take advantage of that.  Obviously, I want to do well in the races as well, but I’m not going to concentrate on that for the success or failure of this goal.  If I get out and run in more races, I’m bound to run more to train, and hopefully that will lead to better results.  I’ve already committed to trying to exercise 4-5 times per week in my “good habits” goal, so these things together should help me be successful with this.  Oh, and I mentioned that I was tracking my exercise with the mapmyrun app, but they also have this “you vs. the year” challenge to run 1000 km in 2016.  I signed up… So far I have only 18 km, so I have a long way to go. I hope I can make it!