I think it was about this time 2 years ago that I posted about a bunch of baby showers that I had planned that year… Well, guess what?  This year was the next round of babies, I guess, so I planned 3 more baby showers this year.  I figured I would share some of what I planned in case you are looking for some inspiration or just like snooping on how other people plan parties…  Plus I have something extra at the end… Can you guess?

Back in June, my friend E and I planned a brunch shower for one of our mutual friends, I’ll call her J.  My friend E hosted it at her house, but we shared some of the duties.  Since she only lives a couple blocks away, I went over the night before to help decorate and set-up.  We kept things pretty simple, and only decorated with a few banners and tissue puff balls that I already had from previous showers/events.

For the menu, we had French toast and gluten-free waffles, along with bacon and fruit salad.  E’s mom helped do a bunch of the cooking, which was great!  My big contribution was the mimosa and ceasar bar that I put together.  I had all sorts of ingredients to choose from, and I froze little plastic babies in to the ice cubes, so you’d have them floating in your drink… Creepy and fun!  I’m pretty proud of it.  And it’s really the only photos that I took that weren’t of people, so it’s all you get to see from this shower.  Sorry… 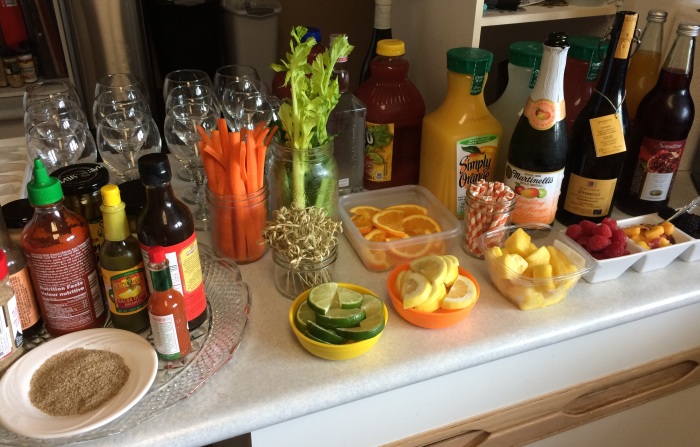 The expectant mom wasn’t a huge fan of the traditional cheesy baby shower games, so we mostly just hung out and ate.  We did do the clothes pin game where you aren’t supposed to say the word “Baby” and you collect the clothes pins from those that do say the “B-word”… It’s a game that doesn’t really require game play, just regular visiting.  The winner got a bottle of locally made apple cider.  Yum!

For gifts, because this was actually baby #2, my friend J didn’t really need any of the regular baby stuff, so instead we each brought a frozen prepared meal, and she took home a cooler filled with food to fill her freezer for when baby arrived.  It’s was a pretty genius idea by my friend E.  Very affordable for everyone, and also so useful!

We invited about a dozen of our girlfriends and some of them brought their young kids, but we managed to mostly all sit around E’s dining room table, with a few lurkers standing behind.  And some of us stuck near the ceasar bar…

In July, I helped plan a baby shower for my running buddy, who had her baby in June.  (I think I mentioned way back that she was pregnant… )  Her sister hosted the event at her house, and we made it a mid-afternoon type event so no meals were required, just snacks…

For decorations (and theme), we played off the fact that my running buddy had a space theme going for the nursery.  Her sister did most of the decorating, with needlework that she had made, with banners and planets that she made, and little dangly star things she bought.  I brought a couple things to help with the decorating, but mostly I concentrated on the food…

For the food, I tried to do some regular snacks, but also some more space themed stuff… We had a fruit platter, and I cut some of the fruit up in star shapes with cookie cutters.  I also cut a couple peppers up for the veggie platter the same way.  The cupcakes were supplied by my running buddy’s sister, and she added a few cupcake toppers with space stickers.  We also had some space themed candies in bowls: Rockets, Starbursts and Mars bars.  And the grocery store sells these packages of “Moon Cheese” that are some sort of freeze dried cheese balls.  Weird, but they added to the theme, so I bought them.

For activities, again, we didn’t really need much to keep us busy.  We had the new baby to meet and pass around.  And one of my running buddy’s coworkers also brought her new baby, so we were amused by the two of them.  But, I did put together a fun game with baby photos.  Everyone either sent me a baby photo ahead of time, or brought one with them to the party.  I then collected them all, mixed them up, numbered them and displayed them.  Everyone then took some time during the party to write down their guesses as to who was who.  It was actually a really fun thing to do, and a great ice breaker because there were quite a few people that didn’t know each other at the shower.  This is the photo that I used for the game:

Because her baby was already born, my running buddy had put together a list of items, kind of like a registry, that she was still looking for, which we used as inspiration for all the gifts.  It was a bit more traditional in that sense, but worked out great because she already had a bunch of stuff, and had figured out what she was missing.

The third baby shower that I helped plan this past summer was actually a surprise baby shower in August.  My friend M lives out east now, and she’s due at the beginning of December, so when she came home for a visit in the summer, we decided to plan a surprise baby shower for her.  Her mum hosted it at their lakeside log cabin, so that, along with the fact that M and her husband are both pretty active and outdoorsy, helped decide the theme to be forest critters.  (And yes, I have done something similar before… But that just meant that I could reuse some of my decorations.)

This shower was probably the most traditional of the bunch this summer.  We had an afternoon shower and people could stay later if they were able to for a BBQ dinner at the cabin (and enjoy some lake time).  And I think I went all out with the decorations… I bought a bunch of things used on VarageSale (or leftovers from someone else’s forest critter shower) and also bought some new stuff from HomeSense. (I also returned some of the decorating stuff after the shower because I didn’t actually want to keep it… Shhhh… I know it’s totally cheating the system… )

We set everything up on the grass beside the cabin.  When people arrived, we had the “B-word” clothes pin game again.  (Yay for reusing things!)  On the same table I had envelopes for people to write their address on, since M lives out east and would probably have to mail thank you notes out from back there… I also had sunscreen in case anyone had forgotten.  (I burn super easily, so I need to reapply sunscreen a lot!)

M’s mom supplied all the food for the BBQ later in the day, so I did all the snacks for the afternoon.  I made a normal veggie platter, but arranged it to look kind of like an owl with dip bowls as eyes.  Can you see it?  I learned from my last attempt that I can’t make them look right, so I ordered cupcakes that were meant to look like toadstools, and labeled some chocolate covered caramels as “Bear Poop” just for fun.  The “pièce-de-résistance” was my hedgehog cheese ball.  I spent quite a bit of time forming that thing (and had to be super careful transporting it up to the lake so it didn’t get squashed).  Of course, as soon as everyone arrived, he got decapitated and had chunks taken out of his side… He was tasty though! 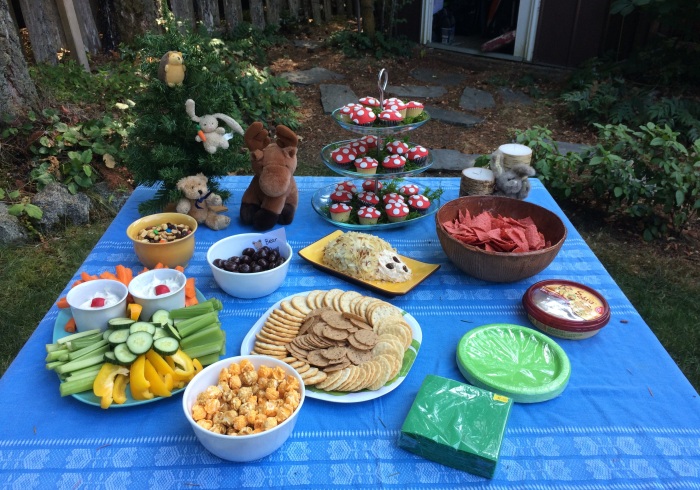 The other snack that I provided, which was also the party favour, was a trail mix bar.  I don’t think the photo does it justice, but I had so much fun putting it together.  I had little take-out boxes that everyone could fill up with all the different types of yummy trail mix ingredients.  Having the ingredients separate allowed everyone to make their own mix with only things that they like, and also to make the ratio of candy to nuts exactly how they like it. 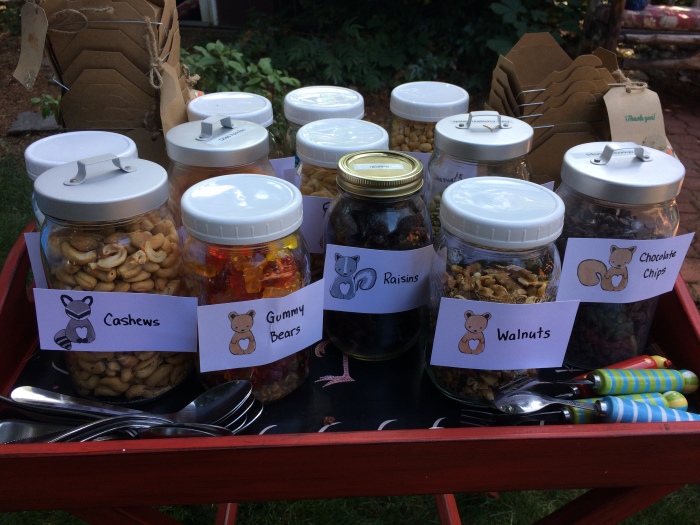 M’s mom and dad supplied the drinks.  I wish I had decorated the drinks table a bit better, but it worked out because then there was table space for everyone to put down their drinks or snack plates.

Because it was a surprise shower, we didn’t really have any ideas to go on for gifts, but everyone just brought something that they thought M would like for her baby.  Before we opened all the gifts, we did play a little baby word scramble game (that’s what the yellow folder is in the first picture), and gave another bottle of locally made cider as the prize.  (I personally love a bunch of the locally made ciders, but the nice ones can be a little pricey for regular consumption, so I have a tendency to use them as prizes… I don’t think anyone really minds.)

The day at the lake was topped off with some time on the dock and a great BBQ dinner put on by M’s parents.  I actually ended up spending the night up at the cabin with M, just like we used to when we were kids.  It was a great weekend!  And of course, I brought Bentley with me.  He loved the lake!

Now for the “something extra” that I mentioned at the beginning of this post… I’m sure you’ve guessed it by now, but I’ve been keeping a secret from you, my online friends, for the past few months… Bentley is getting a little brother in March!  A little human baby brother!  Yup, I’m pregnant!  About 4 1/2 months at the time of this post.  Crazy, right?

So that gives me a bit more of an excuse for my random and intermittent blog posting, right?  And here’s hoping the renovations get done before March…

15 thoughts on “This Year’s Baby Showers… And…”