At the beginning of the year I made myself 5 personal goals.  I haven’t done any posts summarizing how those goals are going so far this year, so I think it is high time for me to do just that… So, here it goes…

Goal #1 was to visit with friends and family at least twice per month.  I started with this spread in my bullet journal: 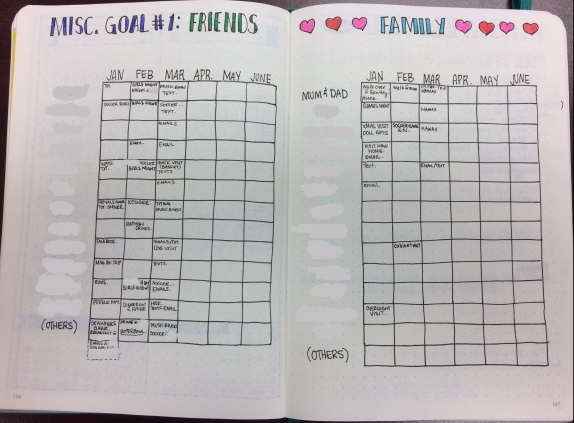 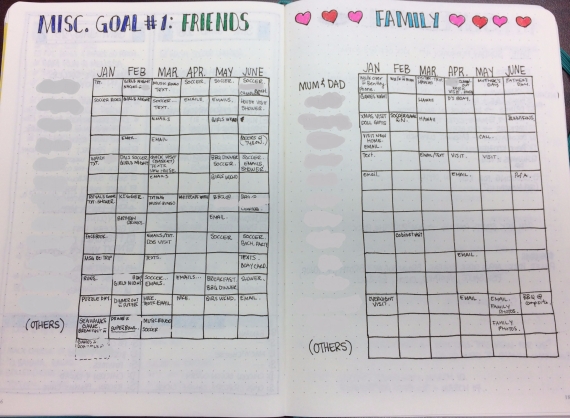 And since that spread ended in June, I created a new spread in my new bullet journal to continue from July to the end of the year. 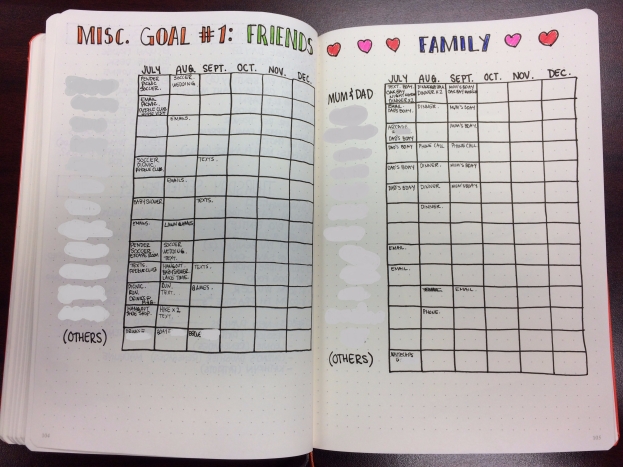 In terms of success levels, I’d say I’m at a pass.  On paper, I’ve definitely been visiting with lots of friends, but I feel a bit like I haven’t been intentional enough about the effort I put in to this goal.  I still have 3 months to put in a bit more of an effort, so I’ll try and turn it around before the end of the year.

Goal #2 was to read 12 books this year.  So far I have completed 8 books this year.  Well, 9 if you include a small e-book, but I didn’t put that one on my list in my bullet journal, so we’ll leave the count at 8 for now.  (I might count that one in the future if I don’t make it to 12 by the end of the year.)  Of those books, 2 were ones that I started last year, just never finished… And the other 6 were pretty “fluffy” books… You know mystery or romance novels… But I’m still counting them!  Only 4 more to go before the end of the year.  I think I might actually succeed at this goal!  And hopefully I can add a couple more books with more substance rather than just more fluff…  I have a bunch that I’ve started, I just haven’t finished…

Goal #3 was to run 1000 km this year.  I know for a fact that I will not make this goal.  I’m not even going to try… sorry… This year has just not worked out to being a very good running year for various reasons.  I’m just going to let this one slide and ignore it for now.  I’ll revisit the idea next year…  That’s not to say that I won’t be trying to stay fit and healthy, but I’m just not going to worry about keeping track of my running distances, or trying to squeeze in that many km before the end of the year.  Onward…

Goal #4 was to have a monthly focus for each month.  As I discussed last week, I haven’t exactly been very good at this goal… We are in month 9, and I’ve only done 4 months with a focus… If I can keep it up for the next 3 months, I will at least be over 50%. 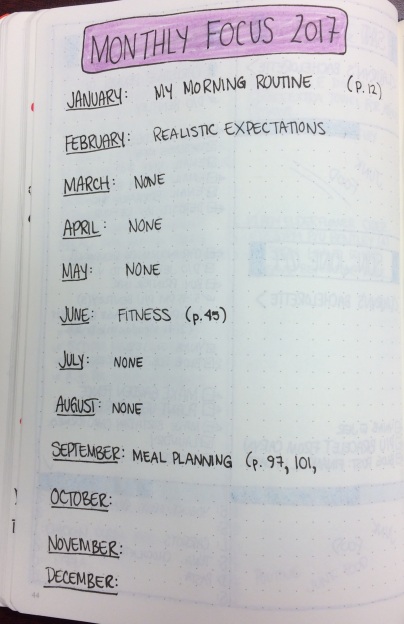 Goal #5 was similar to #4 but with a monthly challenge instead of a focus.  The idea being that the challenge would be a lot more quantitative, instead of qualitative… You know, an easier definition for success… Well… In January, I started the MinsGame Challenge… But I didn’t finish that until… June… February I started with one idea for my monthly challenge, but then switched it up mid-way through the month… I’d call that one mildly successful… In March I made myself the challenge of a 5 minute daily clean-up.  After that… I don’t have any monthly challenges… So… 3 out of 9 months… Maybe I can count my blogging promise as my challenge for September… What do you think?  Fair?  Then I will be at 4 out of 9… So, if I do a challenge for the remaining 3 months, I can still make it to over 50% on this goal too!

I have my work to do if I’m going to call myself successful at these goals at the end of the year, so please wish me luck!

Have you done a review of your personal goals for 2017 lately?  Do you have some goals to complete before the end of the year?