So… Let’s get started…

If I’d done this update at the beginning of April, instead of the beginning of May, I’m sure the status of these funds would be a different story, but because I worked loads of overtime in April, we had a big extra to add to our savings goals, so both of my emergency funds are on the way up.  If I’m being completely honest, my “pet emergency fund” is also where I take money for buying pet food and routine vet visits, so there is a possibility that it will go down before the month is up, but hopefully we will keep up the months where we contribute more than we take out…

Waiting (not so) patiently for dad to get off work. #dockdog #bernesemountaindog #puppy #tgifriday

Other than paying for our trip to Hawaii (which cost more than we had planned for, but was well worth it), these goals have taken a bit of a back seat to the emergency funds.  I don’t think that’s necessarily a bad thing though… And luckily enough for us, it turns out that we don’t need to pay anything on our taxes this year, so that planned spending category can just be eliminated.  The other categories haven’t had much going on…

Despite the goal of actually decreasing our net worth by spending loads of money on our home renovations, there have been delays in the permitting side of things, so not much of the cash has left our account lately… So we have once again had an increase in our net worth.  Although, the increase really only comes because April was down… Our net worth is pretty much exactly the same as what it was when I wrote our March financial update. 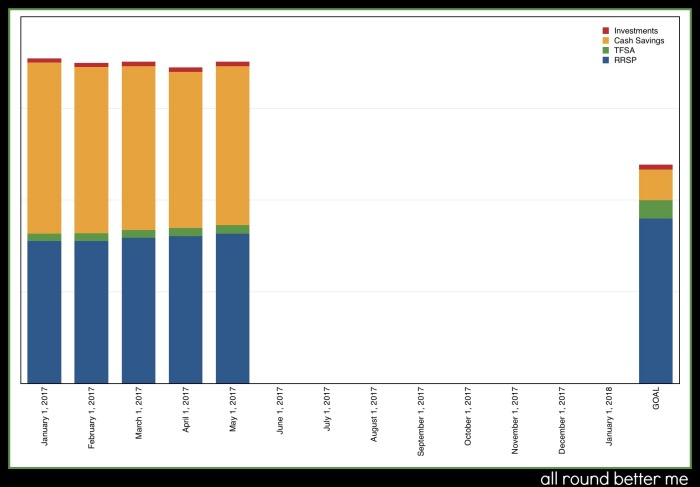 So, this is probably cheating, but since a large chunk of March was spent on vacation (which comes out of planned spending), our regular expenses for March were well below $8000.  And then for April, since I was away for most of the month for work, I didn’t spend anything, and I think that my husband led a pretty frugal bachelor life while I was away, so April also came in well below the $8000 goal.  And I guess 2 months of limited pet expenses also kept some of that spending down…

In any case, whether it’s cheating or not, that was 2 very successful low spending months!

All-in-all, I am happy with our results for the last couple months!

How are your financial goals for 2017 working out now that we are a third of the way through the year?