As I mentioned in my last post, we have big plans for renovating the inside of our house.  I discussed what we have done so far, mostly to the exterior of the house, and so now I will go over some of what we have planned for the inside.  Although, it may take us years to actually get it all done…  Jordann at My Alternate Life did a similar post when they bought their house this past summer, so I’ll follow a similar format…

Our house is a classic 1950s home for our area.  There are so many of them around, that the layout is super familiar (and when we were house hunting, we went through a bunch with similar floor plans).  Here is the floor plan of the main floor of house as it was advertised when we bought it: 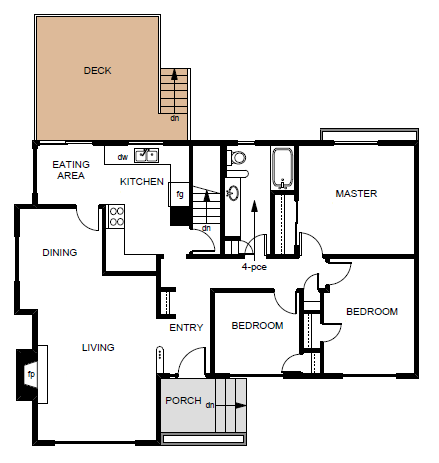 And just for fun, I also found some of the photos that were used for the listing… So you’ll be able to see how we have updated things so far (by doing next to nothing).

This lovely dark photo is from the listing, but honestly we haven’t done much to update the living room yet… We updated the curtains and put in our own furniture, but we didn’t even paint over the A&W colour scheme yet.

The plan for the living room is pretty simple:

Another shot from the listing here.  We have removed the chandelier and replaced it with a more modern light fixture, and we have replaced the curtains, but other than that, this room has remained unchanged.

The plan for the dining room is tied in to the kitchen and eating area (removing walls), but the area itself is just fine, it just needs a new paint job.

This is where the big changes are going to take place…  Other than taking down some window coverings and replacing the dishwasher, we haven’t done any changes in here yet. 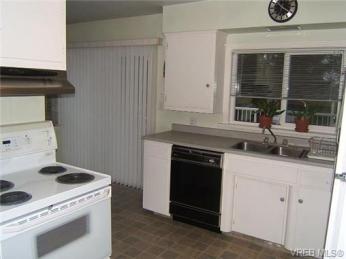 But this room is going to be a complete gut job.  We want to:

We updated the eating area with cute and colourful curtains, but that’s about it… Oh and removed the vertical blinds from the sliding door.

For this one, I want to take out the wall between this area and the dining room as well, to basically make a giant single dining area.  However, my husband isn’t totally on board with that… I’m working on him.  But if we do take out that wall, then we’ll also want to try and push out the eating area wall to match the dining room exterior wall.  Not totally sure we can do that yet, but we are working on the plans and checking with the municipality to see if we need to get variances on the bylaws.

I’ve shown photos of my bathroom before when I did decluttering projects, so you know that it hasn’t changed much from this old photo:

To do in the bathroom:

The master bedroom is pretty much fine.  The only thing we have done so far is replace the light fixture with a modern one that was not a “fancy” chandelier.  We want to:

In the bedroom that my step daughter currently uses when she is living with us, we pretty much want to gut it.  The walls are wood paneling covered in wall paper, and the ceiling is very ugly ceiling tiles.  Plus, we are pretty sure that there isn’t much in the way of insulation behind the walls…  So we want to:

The other bedroom is now what we use as our office.  Or sometimes it is called the “cat room” because this is where the cat tower lives.  You’ve seen this room before when I did my decluttering…  In any case, this room is basically going to be the same updates as with my step-daughter’s bedroom since it is pretty much identical, though smaller.

Honestly, I know we won’t be getting to the basement for a while because we don’t want to tackle it until the main floor is done, but because we are going through everything, might as well include the basement in this post.

So, here’s the “before” basement floor plan:

I mentioned that we got rid of the furnace and the oil tank, so that’s opened up both the garage and the hallway area, but other than that we haven’t done anything down there, other than fill it up with important keepsakes.

Oh, the plans we have for this man-cave in the basement.  I would like to make it my own personal sports pub, and I will call it the grumpy cat, in honour of my big cat Casper.  (He’s a bit of a crank these days…)  Ideally we would get a bar down here, and expand this room to take over the storage area that is outside of it.

The dungeon bedroom, as we call it…  If you look on the floor plan, you’ll see this little nook that is in between the bedroom and the bathroom in the basement.  I have no idea why the bedroom was made that small and didn’t include the second window.  The window lets in so much light, so we are going to:

Pretty basic there.  The idea is that eventually my step-daughter might rather be in the basement away from us on the main floor, so we want to make the bedroom and bathroom nice down there for her.  Or, if she wants to stay on the main floor, it will be a nice guest area for any visitors that we might have.

This is the best I could d for a photo of the basement bathroom, but it is a basic gut & re-do.  The space is large, but it is cold and dark.

This room isn’t currently even a finished room, so it isn’t exactly the nicest place to spend any time sorting or folding.  I’d like to finish it and update it to include a bunch of storage, especially if we are losing a bunch of storage in other places in the basement (of course, if I could get around to finishing all my decluttering projects I might not need as much storage…)

Our garage is quite a lot longer than we would ever really need, so we have put our heat pump air handler inside the back corner of the garage with the plan to close that in and make a separate space for storage and the heat pump, while still maintaining enough room in the garage for a car.

So there you have it, the renovation plans…  It’s a lot to tackle, but we should be able to do it in stages… And hopefully we get started on it pretty quickly in the new year.

Do you have any suggestions or ideas that maybe we have missed that we should add?

10 thoughts on “Home Renovations – The Plan…”