Another month has come and gone… And this one was a bit of a spendy month… But, it still meant an increase in our net worth, so that’s a win, right?  But let’s go over the details.

For only the second month this year (the other month was February), we have gone over the monthly average from last year of $7700.  This average excludes any planned spending and any contributions to our RRSPs or TFSAs because those are technically savings.  This is just for our regular living expenses (mortgage, bills, food & drink, etc).

Last month we were close to going over, but managed to stay just under at about $7400.  This month, however, we went over by around $500.  I know that we had one major expense that happens annually, I renewed my car insurance.  That comes in at just over $1000 for the year, so without that we would have been under… Perhaps another argument for the one car experiment to become permanent?

How does this month compare to last year?  Looking back in history… If we ignore all the planned spending that we did last year for our wedding (that would definitely make August  2015 the most expensive month), June 2015 was the most expensive month of our entire YNAB history.  Even going over our goal this month, we are still much better off with the $8200 of June this year, than the $9700 total for June last year.  Of course, I am pretty sure that some of the purchases made in June 2015 were classified incorrectly and may have belonged in planned spending (which I don’t count in this total because those are special planned expenses that are saved for)… but I’m not about to go back and change things now…

And now for a quick recap of my finance-related goals for 2016:

Right now, our emergency fund is sitting in a savings account with Tangerine.  It’s not exactly making money, but it does get a small amount of interest each month, and I like that it is accessible cash in case of an actual emergency that we need it for.  However, I signed up for a Tangerine MasterCard with cash back rewards, and they have a promotion where you can get 4% back on your chosen categories if you deposit the rewards directly in to a Tangerine savings account… So, this month, with all our spending, we earned a neat $50 of rewards to add to the emergency fund.  I’m not going to make it to $10,000 very quickly with $50 increments, but $50 is still more than nothing!  And since I didn’t have a lot leftover in June, the emergency fund has only increased by $100… Grand total: $3100.

Goal #4 – Save for Planned Spending

Last month I hadn’t updated my planned spending spread in to my new bullet journal, but I finally did and I have decided to change up the way I display it… This more closely follows the categories that we have set up in YNAB, so it is easier for me to show the progress.  In the travel fund, we are sitting pretty at $16,200 of $19,000 saved, but we have already spent $12,600 (some of which was overspending, like the honeymoon), so the balance sits around $3600.  For the remaining trips this year, we will need a total of around $8500, so we need to save another $4900.  Looking at my spread now, I think it might be an issue once I actually spend all the money… Oh well.

In the home reno fund, we have saved up $8400 of $34,000, and have only spent $800.  We are paying the bill for our new gutters this week, and will be getting the exterior painted soon too, so that “spent” number is definitely going to increase soon.  In my bullet journal, I have decided not to show the last $18,000 goal for the home renos because it is not likely to happen this year (and I didn’t have space on my page).

The other random savings goals are the dog fund and the “other savings goal”.   For the dog fund, I decided my initial estimate of $1000 was a little low, so I have decided that I should probably have $2500 or so to pay for the dog and the initial expenses… right now it is sitting at $1800 (though that will also cover any cat related expenses that may come up).  The “other savings goal” I haven’t touched at all yet… that was part of the stretch goal for the year anyway, and not a priority. 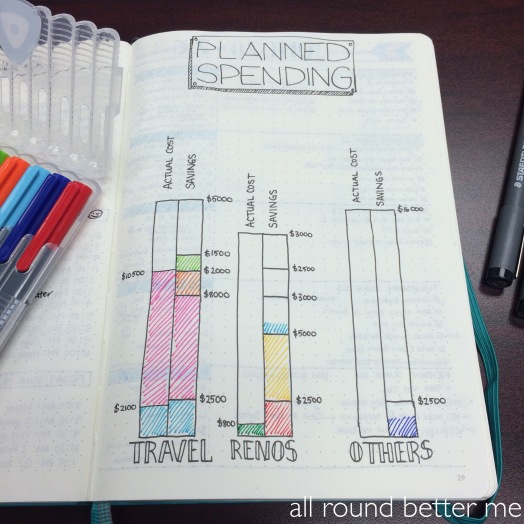 What to you think of this spread?  Better than my old one?  It’s still not perfect, but it is feeling better than the old one, so we will call that progress.

We had a small increase this month, so we are up 3% from the beginning of the year, but again (like last month), this is mostly because we are hoarding money in our planned spending accounts for all our home renos and travel that we have planned.  I am guessing that our net worth in August will show a decrease because of the renos planned for this month… 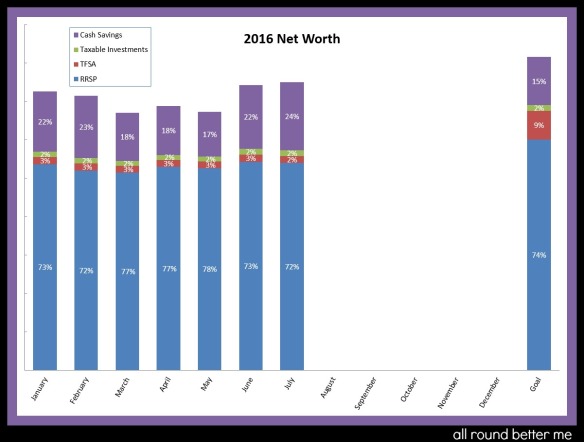 I have been neglecting this goal lately, so I’m thinking I should transfer over my to do list from my old bullet journal in to my new one so that I can easily reference it and get going on completing more of the tasks… Stay tuned for an update on that…

How was your June financially?