I’m at the age when a lot of my friends are having babies (or have already had babies, which are now small children…).  So for me, who has never been a big baby or kid-person, it’s a little weird.  Babies and kids just make it inappropriate for me to drink excessive amounts of wine… but one thing babies are good for is an excuse to have a party… with a fun theme!

(That last paragraph may have made me seem like a horrible person, and I don’t think I am… I really hope I am not… I am very happy for all my friends with babies and children, and maybe I’ll be someone with a baby myself someday, but until then… I relish my freedom and enjoy my alcoholic beverages.)

Anyway, as I briefly mentioned earlier this week, this fall I was given the pleasure of planning not one, but two baby showers, both for babies that were already born.  I have planned multiple pre-birth baby showers in the past, but these were my first “meet the baby” baby showers.  As such, I had to change up my plans and take out the cheesy baby guessing games…

The first was for a friend who has moved away, and had her baby back in the late-spring/early-summer.  She was home for Canadian Thanksgiving, so we planned a party for that weekend so all her home friends and relatives could meet the baby and celebrate both her and the new addition.  Another friend hosted the event at her new house, but we split up the duties between a few of us to keep things easy.  We decided on an apple theme, since it goes with fall, and was an easy one to run with.

We decorated with apples, which was both easy and frugal.  I made a small banner and I also put together an apple tree guest book that I put together in a frame to be art for the little one’s room at home.

Because they had to travel, we tried to push for no gifts and instead, most of us opted to “feed the pig” (a piggy bank) and start a travel fund for the new baby so she could come home and visit her family here more often.  Of course, there are always some gifts, but they were all extremely thoughtful and mostly homemade, which is pretty awesome.

To keep things simple for the hostess, we asked everyone to bring their favourite apple dish to share and we (the organizers) provided a few staples (bubbly, hot apple cider, veggie plate and cupcakes).  We also decided to rent small plates and champagne glasses, since none of us had enough of our own to provide for everyone.  It was surprisingly affordable, and I will definitely be looking at that option again when hosting or planning big parties.  (Added bonus, when renting you don’t have to wash the dishes!  Just scrape any excess food off and put them back in the wooden box!)

I had originally planned to have a few games and activities, but I ran out of time, and it turned out that they weren’t really required.  We enjoyed ourselves just by catching up with everyone, passing around the new baby, eating and drinking, and we also got to explore the new house.

The second baby shower this fall was for my old roommate.  Her baby was born in October, but we waited until just the other weekend to have the baby shower so both mom and babe could get settled in.  For this one, I hosted the event at my house, and chose a woodland critter theme.  I had fun crafting little paper forest animals.  I also found a fitting “Congratulations” banner at the thrift store, but forgot to take a picture of it (you’ll see I didn’t actually take many pictures from this baby shower at all).

I attempted to make toadstool cupcakes, but they turned in to little pink and white polka-dot cupcakes instead.  Still tasty, but not what I was going for.  (Side note, I don’t think I have ever written the word polka-dot before… is that weird?  It is a strange word…)  I also wanted to make little acorns from Hershey’s kisses and cookies, you know the ones that are all over pinterest, but unfortunately the cookies I bought turned out to be too big, and my attempt at fixing it with icing totally failed.  So, instead we had a bowl of Hershey’s kisses and a plate of cookies on the table with all the cheese, crackers, veggies and other goodies.  (Again, no pictures, sorry.)

For activities, we ate and drank, of course, and the new mommy opened her gifts, and then we spent a good deal of time making an alphabet book for the new baby.  I haven’t yet finished it, I have to bind it and such… But it was pretty fun, and hopefully baby enjoys our artistic attempts at something to represent each letter of the alphabet.

My old roommate and I both love popcorn, so I was pretty happy with the fact that I did manage to put together little bags of popcorn as favours for everyone that came.  They looked really good all together on the table, but I didn’t get a picture of that… I only managed to snag a picture of the one bag that was leftover at the end of the party… 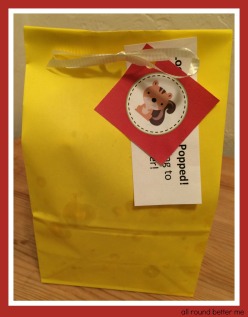 I am pretty happy with both events.  Everyone had a good time, and we kept them simple enough that neither event cost too much.  I had many more ideas that I wanted to do for both of the events, but I struggled with getting things done in a short period of time because I was away for work for most of the fall.  I pretty much would come home the day before the event, scramble everything together and run with what I could get done in time… But I made sure that I didn’t worry about the small stuff and just went with what I could get done, and everything seemed to work out great.

The wonderful couple at Our Next Life wrote about finding your calling just the other day… I really love planning and hosting parties and events… Do you think that this could be my calling?  I wonder if I could make it in to a money-making venture…