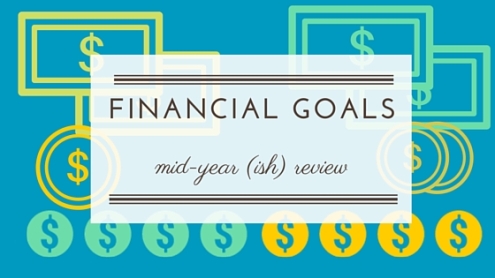 On Friday I made mention that I would spend some time reviewing my goals from the beginning of the year and take some time to look at where I stand with them, and decide if they are still relevant or if I need to update them.  Back in December when I made my goals, I started with the Financial Goals, so I thought I’d start by reviewing them quickly…

I originally had 5 financial goals.  The first was to make and stick to a monthly budget.  I have made some definite progress on this one, and it went much better once I started using the YNAB software.  If you go through my monthly budgets, you’ll see that I haven’t once actually had a month that follows the initial budgeted plan… However, I have been learning a lot about our spending, and feel like we are very close to turning the corner… Hopefully around that corner is much less spending and much more saving.  We will see… But today I wanted to decide if I am achieving this goal or if it needs to be revamped in any way.  If I go with “sticking to a budget” as my definition of success, I am definitely failing.  But if, instead, I use the fact that each month I am making a budget, and then monitoring our spending closely, I feel like I am succeeding with this goal.  So I’m just going to leave it as is and keep plugging along.  Hopefully I’ll turn that corner soon!

My second financial goal was to save up for various large planned spending expenses.  2 of the 3 expenses are done and paid for.  We got our roof done in June, which emptied the home reno fund, and we just got married, so the wedding fund has been emptied as well.  So those were successful and completed goals.  The education fund for my fiance was put on the back burner when we were informed of the long wait-list for his program.  My husband (still strange, haha!) is now looking at going a different direction with his education, so we want to revisit this savings goal and try to get the $7500 that we wanted to save in there as soon as we can.  It’s August now, so let’s say I put a deadline on this savings goal of November 1.

My third goal has been revisited many times already this year… My RRSP contribution goal.  Originally I had it as 40% of my cap… but that was complicated, was it 40% of last year’s, this year’s, my total… and it’s much easier to just have a number to work towards.  So I gave myself some numbers and I have met them, and then went further… So in June I increased the number again, and then increased my direct deposit contributions.  Thanks to the wonderful markets (why do they have to go down right before I review my financial goals?), I’m thinking it might be a stretch to make that new goal, so I will keep it as is for now and plug along…

My fifth and final goal was to have 3 month’s worth of mortgage payments in an emergency fund (that’s around $10,000).  It was always intended as a stretch goal, but back in May/June, I had some money put aside for it in our budget, but then a few spendy months happened and we used it all up for non-emergency things.  With the other savings goals still to be finished up for this year, it is unlikely that I will also be able to save up this amount, but hopefully I can get a start on it.  With that in mind, let’s revamp this goal to be a bit more realistic… I would like to at least have $3000 in our emergency fund by the end of the year.

So really I haven’t changed my financial goals much after all.  I’ll update my goals page with these small changes and update my sidebar as well… then it’s time to save, save, save!  If I add it all up, I’m looking to have almost $13000 in savings by the end of the year… that’s over $3000/month… yeah, that’s definitely going to rely on some overtime and very careful spending… Wish me luck!

Have you reviewed your financial goals lately?